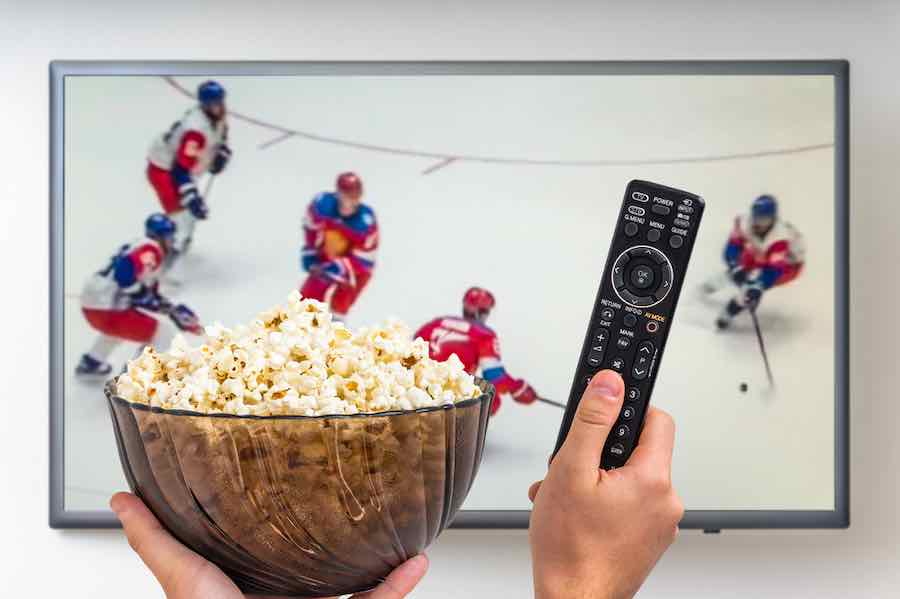 From heartwarming to hilarious, from inspiring to informative, hockey movies are a great way to enjoy the sport and the stories and characters behind it.

If you’re looking for a hockey movie to watch in the off season, check out our list of some of the best hockey movies of all time:

No list of the best hockey movies of all time is complete without mentioning Miracle, which tells the story of Team USA’s victory against the Soviet Union team at the 1980 Olympics.

Kurt Russell plays Herb Brooks, the coach who puts together the American team with the intention of willing it all for the United States, even though the Russian team is an incredibly formidable opponent.

After realizing that the players are having a hard time coming together and giving it their all, he pushes them harder and harder, giving them an opportunity to band together in the struggle. Willing to let himself be the target, he gives them a common cause and a shared enemy – himself – that binds them together as a team.

Eventually, the team is so committed to each other and to their mission that one star player chooses to play through an injury. As they beat the other countries’ teams and grow closer and closer to the final match, they’re still considered an underdog against the Soviet Union team.

As any hockey historian can tell you, despite their setbacks, the American team ended up coming from behind to win the game, securing the gold in what is often referred to as one of the greatest sports upsets in Olympic and hockey history.

Although it’s not as well known as other classic hockey movies, Indian Horse emerged in 2018 as one of the best hockey movies made in the last decade. Made by a Canadian filmmaking team and executive produced by Clint Eastwood, Indian Horse is based on the novel of the same title by Canadian Ojibwe author Richard Wagamese.

The film follows a young man named Saul Indian Horse, who belongs to the Canadian First Nations and grew up in an Indian Residential School. In the residential school, Saul was abused and forbidden from speaking his Native language or participating in his Native culture.

After one of the staff at the school sets up an outdoor ice hockey rink, Saul becomes a star player. This allows him to leave the tortuous residential school and move in with a foster family that lives in an area with its own all-Indigenous hockey team, the Moose.

Saul enjoys playing for the Moose, though their Indigenous identity makes them a target for racist abuse. After being drafted for a better team with the potential to join a professional team, Saul becomes even more alienated by the racism, and after a disturbing visit from his former teacher and coach from the residential school, he decides to leave his new team and return to his Moose teammates.

Though Indian Horse deals with serious themes, it contains important messages about Canadian culture and the treatment of First Nations individuals, all told through a powerful story about hockey that any hockey fan or player can relate to.

Many hockey players say that watching the movie Slap Shot, starring Paul Newman, is like being back in the locker room again. And it’s no wonder that the movie expertly captures the goofiness and chaos of a real life hockey team – the film’s writer, Nancy Dowd, based it on her brother’s experiences playing hockey in the seventies.

Considered one of the funniest sports movies and one of the best hockey movies ever made, this cult classic follows a small town hockey league at risk of being shut down after massive layoffs at the town’s mill. In the face of folding, the coach gives a free pass to two brothers on the team who are known for their violent, crazy style on the ice.

After garnering plenty of attention – both positive and negative – for their goonish antics, the team ends up facing off against their rivals in a game attended by multiple NHL scouts, who were all hoping to see the bonkers action that the team is known for.

However, drama off the ice influences the state of the game, when a rival player spots his wife cheering a little too loudly for our heroes. He decides to try and outperform them by doing a striptease on the ice, causing him to get disqualified and handing the win to the hapless heroes of the story.

It’s no mystery what makes this movie one of the most charming and best hockey movies around. Shot in Banff National Park, this movie captures the unique chaos and internal politics of a local hockey culture.

As a publicity stunt, a well trained professional hockey team from New York plans to come fight the local Saturday team in a tiny fictional town called Mystery in Alaska. As small town drama unfolds all around them, the players prepare for the big match, including planning to drag out the national anthem to force the out of towners to stand still in the biting Alaska cold.

Despite not being taken seriously, and even mocked on live TV by the pros they’re meant to play against, the Mystery team ends up dominating on the ice. No matter what, the residents of Mystery, Alaska are able and willing to show their strength in hockey, which comes from the support of their community all around them.

Filled with the shenanigans of small town life, including accidental shootings, court proceedings, and fisticuffs, Mystery, Alaska demonstrates how hockey can bring people together even as it gives them something to argue about.

Even kids who weren’t hockey fans or players growing up remember the Mighty Ducks franchise, which included three comedic movies about a peewee hockey team coached to an unlikely victory by an array of strange and colorful coaches.

In the first movie, an arrogant lawyer is sentenced to community service and ends up coaching the Ducks, a hockey team on an endless losing streak made up of a bunch of kids who don’t seem all that committed to the game.

The twist? Their rival team is coached by the lawyer’s old coach, with whom he has a history of bad blood.

After a series of miscommunications and movie twists, including a player who switches teams to join the Ducks, the new coach manages to inspire his team and lead them to a climactic victory.

What makes The Mighty Ducks one of the best hockey movies of all time isn’t the heartwarming lesson at the end, though – it’s the laughs along the way, and the goofiness of young hockey players that remind us just how fun and chaotic it was to be out on the ice with our friends at that age.

Later films in the Mighty Ducks franchise follow the coach in his new adult career, where he continues to encounter challenges and learn important lessons as he works with the US Olympic Hockey Team. Humbled by a lesson from a street hockey team, the team changes their strategy and ultimately wins in a tie breaking shootout with Iceland.

Not all hockey movies cover fictional accounts of great players or unlikely victories. Produced by famous documentarian Werner Herzog, Red Army is hands-down one of the best nonfiction hockey movies out there.

Red Army tells the story of the national hockey team of the Soviet Union throughout the 80s and 90s. Viewers get first hand accounts of the team’s exploits and experiences from interviews with team captain Slava Fetisov, who was part of the famous hockey quintet known as “The Russian Five.”

In particular, Red Army explains how the tactics of the coach, Viktor Tikhonov, were ruthless and left many players feeling frustrated, angry, or alienated.

If you’re hoping for an inspiring story about a coach who helped turn things around for his players, look elsewhere. But if you want a hockey movie that’s honest about how brutal coaching strategies can leave a lasting mark, this is one of the best hockey movies for you.

But Red Army isn’t just about sports. It captures the way politics informs sports – something hockey fans are no stranger to, especially now that many players are choosing to kneel in support of social justice movements.

Red Army also details how the Russian sport influenced the American leagues after many players from the Soviet Union were brought to play in National Hockey League teams.

Hockey Scene is a participant in the Amazon Services LLC Associates Program, an affiliate advertising program designed to provide a means for sites to earn advertising fees by advertising and linking to Amazon.com

Hockey Scene is a blog 100% dedicated to ice hockey. Our team reviews the best hockey equipment and gear. Besides that, we also write articles about everything related to hockey.